The Secret- PaleyFest  I only call it a secret because , I haven’t heard of PaleyFest before this month. PaleyFest which is named after William S. Paley, the founder of CBS and The Paley Center for Media. Proceeds from the event support the nonprofit Paley Center. Paleyfest .

Fans and curious people alike, if you want to be “in the know”, and be amongst the first to see screenings to the hottest shows, with an opportunity to learn more about your favorite stars  and get up and personal, then PaleyFest is the way to go. You can buy tickets to the events, but as a member you get the best seats, and so much more you definitely want to get membership to PaleyFest. Which can be done on their website at  paleyfest.org for more information about PALEYFEST and The Paley Center for Media.

I had the opportunity to attend my very first PaleyFest event on Wednesday Mar. 21 at 7:30 p.m.for the premiere of NCIS: Los Angeles!!!! Let me tell you the Dolby Center is such a beautiful venue the crowd was amazing and the sound was incredible!! , The cast which consist of  : Chris O’Donnell (G. Callen), LL Cool J (Sam Hanna), Linda Hunt (Hetty Lange), Eric Christian Olsen (Marty Deeks), Daniela Ruah (Kensi Blye), Barrett Foa (Eric Beale), Renée Felice Smith (Nell Jones), Executive Producers R. Scott Gemmill and John P. Kousakis.. The cast seems to have that same chemistry off set as, they do on. Everyone was just being themselves. Which made each cast member more enjoyable. The Q&A alone was priceless, followed by picture taking.  Can’t wait to go back, it was an awesome experience!!!

A little insight, that I learned about the cast.: that Callen portrayed by Chris O’Donnell has had his wife and children act on the show. Things will heat up even more between Deeks and Kensi portrayed by Daniela Ruah/Eric christian Olsen. Sam portrayed by LL Cool J. smells nice,  according to the cast and each of the cast members look good up and close. John M. Jackson is back again,  also James Remar & Carl Lumbly?!  What a great guest cast! I’m already excited!

I now am “in the know” I am a paleyfest member and look forward to the annual festivals which are held in Los Angeles and New York. For a week long festival of exclusive screenings , panel discussions with the cast and creators of the hottest TV shows. 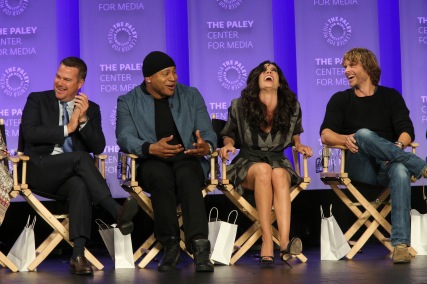 The pictures above are of the live Q&A panel, such good questions were asked by the fans, who proved to be true fans. The whole experience was captivating. I’ll be back !

One thought on “PaleyFest”

This is a text widget. The Text Widget allows you to add text or HTML to your sidebar. You can use a text widget to display text, links, images, HTML, or a combination of these. Edit them in the Widget section of the Customizer.
Loading Comments...
Comment
×
<span>%d</span> bloggers like this: